All was still. Around one hundred people had settled in the rest room for the overnight ferry crossing from Hull to Holland. It was pitch black and the only sounds were the faint humming of the engines and the odd snorer.

All the seats had been snapped up so I found myself lying in a vacant space on the floor with a couple of mates trying to get comfortable. About five minutes had passed and I could feel myself about to drop off.

You could hear a pin drop. Then my mate farted. It began as a kind of muffled snort and developed into a full crescendo. The whole process must have taken at least five seconds. I struggled for a moment, trying to contain my laughter. Eventually I had to leave the room, quickly followed by my two mates.

After docking in Holland we were ushered onto a waiting coach for the one-hour drive to Amsterdam. The landscape was full of all the quintessential things that make Holland so unique.

Windmills were liberally scattered throughout the land. Wonderful white structures whose arms spun endlessly in the wind. The undramatic flat countryside seemed to stretch forever. In fact, over a third of Holland lies below sea level.

The coach dropped us off in the heart of Amsterdam, deep amongst the network of canals that divide this old city into a million different pieces. We found ourselves stood outside the central train station debating our accommodation options. We had decided beforehand to wait until our arrival until finding a hotel.

Just as we were getting anxious, a middle-aged woman approached us. She walked with a swagger and wore an air of confidence.

“Are you lads looking for a room?” she asked in broken English.

“Yes,” we all replied simultaneously. We sensed a solution to our predicament was imminent.

“I have a bed and breakfast not far from here, just two stops on the underground. Would you like a room?”

The hotel was reasonable enough. A twenty-minute walk and we were back in town with all the other tourists, walking round in circles trying to get a bearing.

Amsterdam is a truly surreal place. Legalising cannabis has certainly raised an eyebrow from the rest of the world and is regarded with a certain fascination. As we sampled the local delicacy, one day pretty much blended into another like some sort of hazy dream. Before we knew it we were back home contemplating a quite bizarre vacation. 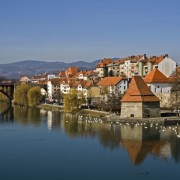 Preparing for an Adventure Vacation in Slovenia
0 replies

Want to join the discussion?
Feel free to contribute!