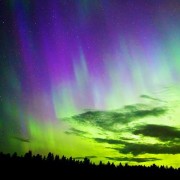 In the larger scope of Northern European countries, Iceland can often be somewhat overlooked. Tucked away ‘in the corner’ and lacking the glamorous profile of neighbours such as Sweden and Finland, the island with the deceptive name – it is mostly green – therefore attracts a smaller amount of tourists than the rest of Northern Europe and Scandinavia.

That is not to say, however, that the country lacks charm, or is devoid of attractions in its own right. Much to the contrary! As anyone who has travelled across the further regions of Northern Europe will attest to, one of the world’s most impressive natural phenomenon can be witnessed in this country: the world-renowned Northern Lights. Iceland is one of the few countries far enough north to allow tourists the privilege of experiencing this dazzling natural light show, and it is definitely one of the strongest arguments in favour of visiting this spectacular location – although, in fact, there are plenty more.

Speak to any keen traveller and chances are they will have heard of, but never actually seen, the Northern Lights. Iceland is, as mentioned above, one of the few countries from which this phenomenon can be experienced – alongside Canada, Finland, and certain other parts of Scandinavia – so unless a traveller has forayed into these specific locations, the Lights often remain a dream rather than a reality.

Taking place primarily in autumn/winter, this is a phenomenon not to be missed by tourists planning to visit the Arctic regions at that time of year. Those that are lucky enough to witness nature’s light show first hand are unlikely to ever forget it – seeing the lights is one of those once-in-a-lifetime experiences that strongly affects the viewer.

Many people may not actually be aware of what exactly causes this fascinating phenomenon, and while it seems otherworldly, there is actually an easy to understand explanation. Also called the Aurora Borealis, the Arctic Circle’s main attraction is caused by a meeting of electrically charged particles emanating from the sun. The Earth’s poles, with their magnetic pull, attract these particles towards the ground, and as they come into contact with the different types of gases in the Earth’s atmosphere, they gradually change colour to create the Northern Lights. Iceland is one of the best places to view the lights and tourists and science aficionados visit each year to witness it in person.

Nor is undertaking this endeavour as hard or costly as it once was. While not so long ago it would take considerable expenses and careful planning to be able to see the Northern Lights, Iceland and the rest of Scandinavia are now closer than ever, thanks to excellent specialised tours companies, which are dedicated to ensuring the best possible experience. There’s now no excuse for anyone to miss out on seeing this unforgettable phenomenon first hand.